The latest update of ACR Build includes the support for ARM-based container images.

That said we do not have to use QEMU for emulation in our ARM-based container images and on the build agent itself as described in my previous blog post.

The files referenced trough out the blog article can be found in my GitHub repository.

Based on my previous blog article we only modify the Dockerfile and the build pipeline to leverage ACR Build.

In the Dockerfile itself we remove the COPY statement for the qemu-arm-static file, because with ACR Build this file is no longer necessary.

All previous tasks in the build pipeline have been deactivated and we add an Azure CLI task instead. The Azure CLI task runs an Inline Script with the following CLI command.

All we need is the ACR name for the –registry parameter, the tags for the –image parameters and the source location. As you can see with the recent update of ACR Build, support for multiple tags was added. That makes it very easy to have a specific build number as tag and the general tag latest.

We can now hit Save & queue to kick off the container build. 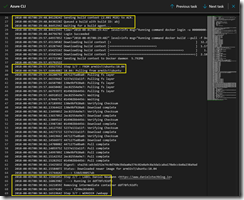 Having a look at the log output, we see that the build context was send to ACR and that we do not use QEMU in the container image.

Now we jump into the Azure portal to have a look at our container image in our Azure Container Registry. As we can see the image is tagged with the build number and latest. Clicking on latest and then on the link under Build ID opens the build logs.

Finally, a short test run of the image on a Raspberry Pi.

In the end ACR Build enables us to build cross-platform container images without any additional infrastructure. You do not have to use VSTS for example. Instead of using VSTS you can directly kick off the container build via Azure CLI from your workstation or using Azure Cloud Shell. Here is an example.