The Azure Container Registry offers three different SKUs which differentiate from each other not only from the feature set. Each SKU comes with included storage starting at 10 GB up to 500 GB. 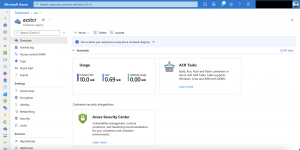 Using the ACR Premium SKU you prevent your registry from filling up by activating the retention feature. After X days, the default is seven days, untagged manifests get deleted automatically.

The ACR Premium SKU provides the mechanism for the clean-up of untagged manifests out-of-the-box. The other SKUs require a script for that.

What all SKUs have in common is that old manifests need to be untagged or cleaned up again by some automation mechanism. Currently, the Azure Container Registry does not provide a built-in mechanism to automatically untag container manifests that are older than X days.

So, you need to implement such mechanism yourself via a script.