The last two weeks were a lot of traveling. From Frankfurt to Seattle back to Frankfurt and then from Cologne to Berlin back to Cologne. But let’s start with the MVP Summit 2014 in Redmond from 03.11.14 till 06.11.14.

I headed over on Saturday the 1st November with Lufthansa from FRA to SEA. Flight was good and I had a perfect service by Lufthansa. During the long-haul flight I watched some TechEd Europe, SCU and Azure Conference sessions.

Instead of staying at the Red Lion as last year I was fast enough at the registration to grab a room at the Hyatt. This was the best thing that could happen, because all evening events or activities are happening at the Hyatt. So I got up early in the morning on Sunday and went to the breakfast with my MVP colleague Raphael Köllner before the onsite registration for the MVP summit.

In the afternoon we went with some of our friends over to the Parlor for some drinks and the Seahawks football game. Afterwards the evening was fully packed with the MVP showcase and the MVP EMEA networking party before the summit kicked off on Monday morning.

Yeah and now the interesting part from Monday to Thursday. Really good sessions, a lot of awesome conversations with the PG members and great dinners with my MVP pals & the PGs. Thanks to all of you who has made this MVP summit such a great event! Before I forget it! The Whirlyball match was a lot of fun on Monday evening. Sad that we don’t have that in Germany. (Thanks to Jakob for the Whirlyball photos). 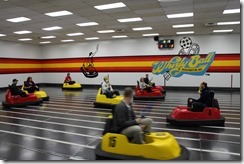 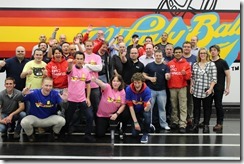 Thursday evening was my lucky day. As I had arrived on Saturday at Seattle, I went immediately to the Microsoft Store in Bellevue for a Microsoft Band. Yep and it was sold out in the whole US. Nobody knew when they would be in stock again. But Thursday was the glory day when the store got his stock filled up. So I went over to the store and after some discussions with the store manager, I got my Microsoft Band. Lucky me!

On Friday I headed back to Germany with Lufthansa after an awesome MVP summit!

Special thanks to my MVP colleague Tao for this little gift. My wife and I like it!

See you all next year!